As Silicon(Si) has reached its material limitation, newer ways are being adapted to extend Moore’s law by

Alongside, there is also an ongoing effort to find substitutes to Silicon(Si). III-V & SiC are promising and have already started displacing Si in applications for power switching, RF amplifiers, and optronics.

Also, there has been substantial work regarding the growth of III-V channel on Si[2][3]. Though pathbreaking, issues have cropped up in this mating due to lattice mismatch & growth techniques among others.

Silicon(Si) is also a material of choice for memory devices. Current memory devices store information based on the electronic charge trapped in an oxide or nitride[4][8][9]. This charge can leak with time, erasing the stored data.

With neuromorphic computing and non-charge based storage being looked into pretty seriously, material substitutes are explored to silicon.

The material under consideration is vanadium oxide(VO2) which exhibits Metal-Insulator Transition(MIT) ie. the material is an insulator at room temperature but starts to behave as a conductor at temperatures exceeding 68°C[6][12].

This kind of material can be utilized for storing data and memory programming. They fall under the category of Phase Change Memory(PCM)[7]. Researchers at EPFL have used reactive magnetron sputtering to produce GexV1−xO2+y films which have a transition temperature of ~95°C[1][10][11][12]. 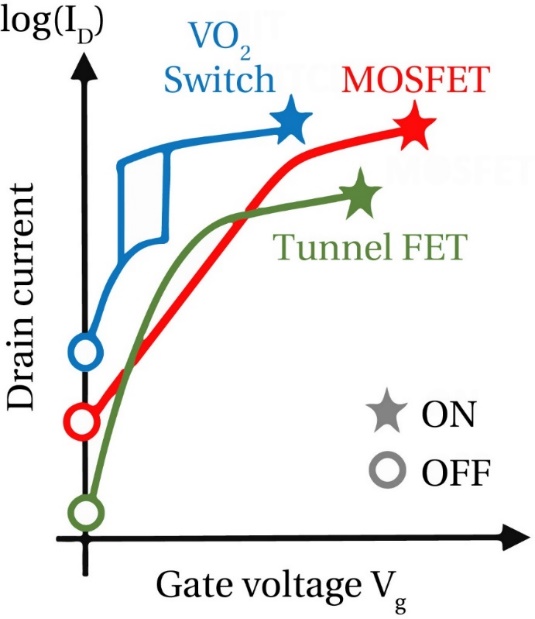 In the future, post optimization, vanadium oxide(VO2) based devices can be fabricated as a part of the CMOS backend flow owing to a low-temperature fabrication giving direct access to the memory cell using the on-chip transistor.